Jump to Latest
THaskins
Honda unveiled the 2022 Civic Si today and despite the reserved design choices they added some more goodies from the Type R to the car, such as the rev-matching system. 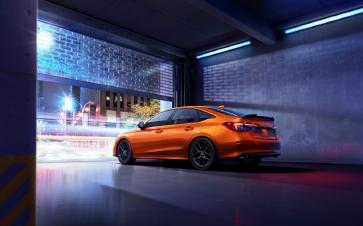 The best-handling, best-equipped and most fun-to-drive Civic Si ever is coming to Honda dealers later this year to entice a new generation of young driving enthusiasts.

October 19, 2021 — TORRANCE, Calif.
The best-handling, best-equipped and most fun-to-drive Civic Si ever is coming to Honda dealers later this year to entice a new generation of young driving enthusiasts. Based on the all-new 11th-generation Civic Sedan, the turbocharged 2022 Civic Si sets a new benchmark for sport compact sedans, with improved dynamic performance and an updated manual transmission now featuring the rev-matching system from the Civic Type R.

More Responsive Powertrain
The 2022 Civic Si is powered by an updated high-output VTEC® 1.5-liter turbocharged 4-cylinder engine with usefully broader power curves than before. The engine’s peak torque of 192 lb.-ft. of torque at 1800-5000 rpm (SAE net) now arrives 300 rpm sooner for a quicker punch off the line and out of tight corners. Performance is also improved at the top of the tach where the engine maintains more output between its 200-horsepower power peak at 6000 rpm (SAE net) and its 6500 rpm redline.

Improving the sound of the engine is a new dual-coil silencer exhaust system that increases exhaust flow 27 percent compared to Civic Touring. To complement the engine’s natural exhaust note inside the cabin, Civic Si uses an improved Active Sound Control system that can produce high-quality sound over a wider range of engine rpm.

A new single-mass flywheel is 26 percent lighter than the dual-mass unit used in the previous Si. The flywheel’s 30 percent reduction in inertia gives the 1.5-liter turbocharged engine a snappier throttle response for an even sportier driving experience, while also improving drivability. To maximize available traction when accelerating, power is routed to the front wheels through a standard helical limited-slip differential.

The net result of these changes is a notably richer and more engaging driving experience, made even more so with substantial dynamics improvements.

Sharper Handling
In terms of body stiffness, this is the most rigid Civic Si ever, with an 8 percent increase in torsional rigidity and a 13 percent increase in bending rigidity compared to the outgoing Si. Like the 2022 Civic Sedan, the new Civic Si also benefits from a 0.5-inch wider rear track for additional stability, and a 1.4-inch longer wheelbase for a smoother ride, as well as greater high-speed stability. The Si’s 107.7-inch wheelbase is the longest in its class.

The most technologically advanced Civic Si ever features a new 7-inch color instrument display with a digital tachometer on the left side, a multi-information display in the center and a physical speedometer dial. A 9-inch HD color touchscreen and wireless Apple CarPlay® and Android Auto™ integration are also standard along with the new 12-speaker Bose premium sound system. Featuring Bose Centerpoint 2 technology and SurroundStage digital signal processing, it’s the best factory audio system in Civic Si history.

Outward visibility is enhanced by the Si’s pulled-back A-pillars, low hood, flat dashboard, low cowl and door-mounted outside mirrors, all design traits shared with the rest of the Civic lineup.

All Civic models including Si feature an Advanced Compatibility Engineering™ (ACE™) body structure that is enhanced for improved compatibility with larger vehicles. This includes improved occupant protection in angled frontal collisions, with a new upper A-pillar structure, side frame and lower firewall structure – all engineered to route crash energy around the cabin. Side impact protection has been improved, with stiffer structures in the roof, side sill and B-pillar, doors, and the rear wheel arch and C-pillar.

Standard on Civic Si is the new Honda Sensing® suite of active safety and driver-assistive technologies that uses a new single-camera system providing a longer, wider field of view than the previous radar-and-camera based system. Combined with software advances and a new, more powerful processor, the system is capable of more quickly and accurately identifying pedestrians, bicyclists and other vehicles, along with road lines and road signs.

About Civic
Civic is Honda’s longest-running automotive nameplate, and Americans have purchased more than 12 million since 1973. Civic is the third best-selling passenger car in America over the past 48 years1. First introduced in 1986, Civic Si has been built in North America for nearly two decades, and the 2022 Civic Si continues that tradition, produced in Ontario, Canada using domestic and globally-sourced parts, with its turbocharged engine produced exclusively at the Anna, Ohio engine plant.

· Registered
Joined Sep 10, 2021
·
27 Posts
The looks of the new Civic are growing on me. I still like how the last gen type R looked, exterior/interior wise. Love the new seats too! Just not sure how I feel about the huge grill in the dash... The 'dash gives me BMW vibes, lol.
1 - 3 of 3 Posts

About this Article
0 likes
2 Replies
Written By: