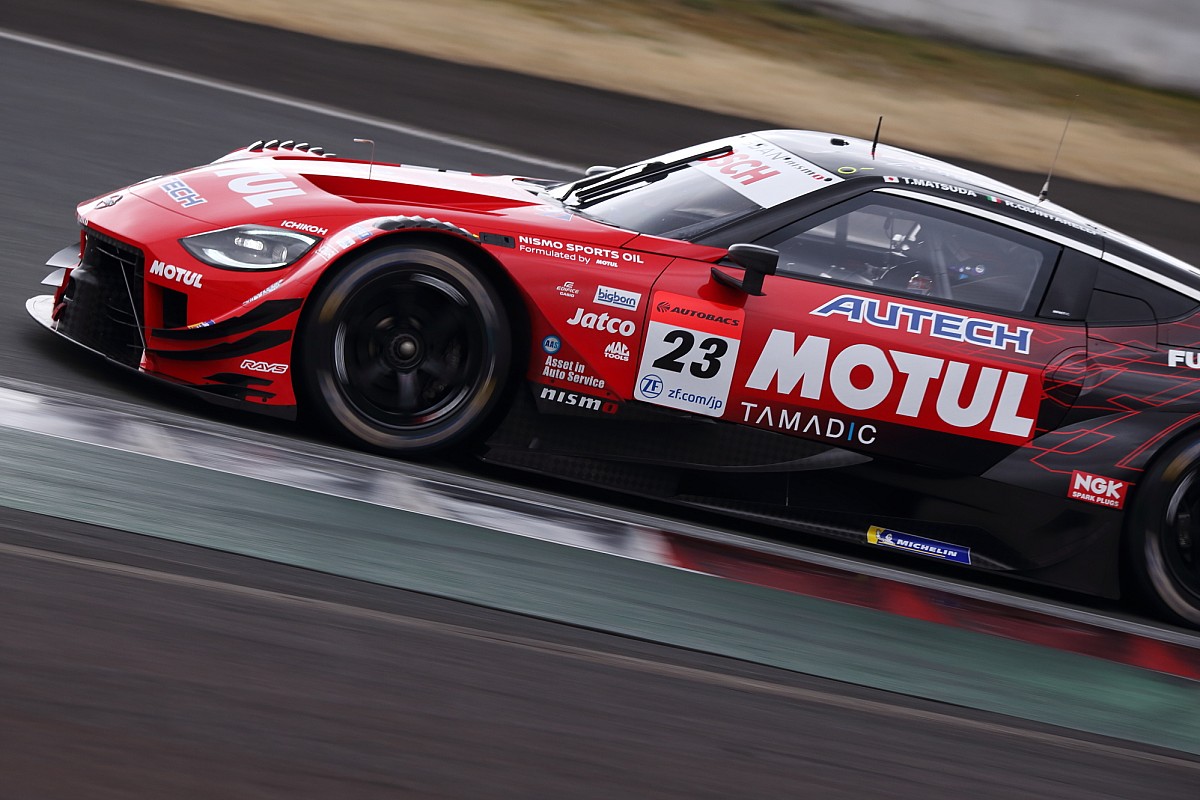 Nissan's hopes of a more competitive showing at Fuji Speedway in SUPER GT this year were boosted as one of the brand-new Z machines clocked 300km/h (186.4mph) in the speed traps in last weekend's pre-season test.

The marque's flagship #23 NISMO machine of Ronnie Quintarelli and Tsugio Matsuda reached the magic figure in the first of four test sessions held over the course of the two days on Saturday morning, while Quintarelli was driving.

That was en route to the second-fastest time of the rain-disrupted test, as Quintarelli clocked a 1m28.139s to get within two tenths of the benchmark established by TOM'S Toyota driver Sho Tsuboi.

Four-time series champion Quintarelli said he was pleased to get confirmation that the new Z has eliminated one of the weak points of Nissan's previous GT500 model, the GT-R, whose high-downforce, high-drag philosophy made Fuji something of a weak track for the brand.

"We had a tailwind, but we reached 300km/h," Quintarelli told Motorsport.com. "I was watching the speedometer before braking… but the tailwind made it really hard to stop the car, I had to brake earlier.

"I was watching Tsugio when he was driving, he was doing 297, 298, and I saw two Toyotas were doing 300 and some others were at around 295, so obviously they are running with different set-ups.

"That’s a good point. When you are more than 5km/h slower in a straight line, it’s difficult."

Speaking to Motorsport.com, Nissan SUPER GT executive director Motohiro Matsumura didn't want to read too much into the Z's chart-topping speed trap figures given the conditions, but was nonetheless encouraged.

"There was a four or five-metre [per second] tailwind [14-18km/h], that’s why it’s hard to compare our car to Honda and Toyota," Matsumura said. "As far as I know, Toyota recorded almost 300km/h and Honda was about 2km/h less.

"My main satisfaction is that all four GT-Rs are around the same top speed despite running different set-ups, including ride height."

Quintarelli said last year that he hoped the new Z would allow Nissan to end its competitive "nightmare" at Fuji, which before the 2020-spec GT-R had traditionally been a strong venue for the marque.

Asked if he felt based on the evidence of winter testing whether Nissan would be able to fight for wins again at the track, the Italian said he felt that Toyota would likely still hold the edge.

"For sure, looking back at the times when we were not running together [in February private testing], Toyota were doing mid-1m26s, which is impressive," said Quintarelli. "We just hope to be as close as possible.

"I’m not sure we can say we are in front. But it’s not like the last two years, where we had no chance. To be close is a step forward."

Joined 4 mo ago
·
108 Posts
That's definitely an improvement. Did you notice anything mention-worthy at that speed?

1 - 3 of 3 Posts
Join the discussion
Continue with Facebook
Continue with Google
or sign up with email
About this Article
0 likes
2 Replies
Written By: